Being brought up from a Christian family, the journey for gospel music for Earnest Kinaibei commonly known as Kay Blessed, was not callous. But remember, as a pastor's son, he vanquished all olds to choose gospel music, contrary to what youths of his age do. How many come from the same family as Kay Blessed but have turned away and changed for good, not giving an ear to their parents? Not having a platform as their parents? How many? Many do not emulate their parents' norms.

He says that if a child is trained in the right way, he will not run away from it, but will grow with it, giving reference to the spiritual book.

"...that is just a notion. The Bible says train a child in the right way and he will never depart from it even when he grows old."

From Bungoma, in a small village; Township, music grew in Kay Blessed as modified by his supportive parents. At the age of seven, his parents noticed his love for pianos and was singing in the church since the age of five. They thought of nothing but in what seems like they wanted to brew their son's talent, they bought him a piano. He used the piano which guided him in singing hymns. He also admits that his parents' gift helped him build confidence in music.

Growing up and exploring his boundaries, the upcoming star learnt of his other talents. He could then not only sing written hymns but also wrote and sang them. Additionally, he learnt the art of poetry, drum set, spoken word and upgraded to guitar. He creatively came up with the name Blessed due to the plethora of talents the Almighty conferred him.

"Blessed is because God gifted me with many talent; writing songs, singing, doing spoken word, playing piano and drum set and bass guitar and the rest. Kay is from the initial 'K' for Kinaibei," he says.

His composing songs experience has been smooth since he writes what he sees and the testimonies of the wonders God has done to him. The art of poetry which he developed in high school has also helped him write songs with ease, just like falling off.

"It has been great. I write from revelations and testimonies of God's greatness in my life. It has not been hard because I used to write poetry works in high school for spoken-word presentations," narrates Kay Blessed.

As many parents do not buy the idea of their sons and daughters engraving in the walls of talent, Kay Blessed parents held their son in their arm and watched him walk in the walks of talent. Many parents want their children to pursue certain fields such as medicine, education, journalism, aviation, engineering among other professions they give heavyweight. Most parents claim fields which are talent-oriented are not serious. You may find an actor who gets much money from his talent, but his parents still not sufficed with their son or daughter's job.

Cutting the cost of video production for his gospel works, the parents stepped in for a helping hand and Kay Blessed received the hands in acknowledgements. He held them tightly as he steadily walked in a journey he started from their endorsement. Having started writing songs for productions barely a year, Kay Blessed has two songs released with others yet to be sent to the airwaves to spread the gospel.

The gospel artist, who pursues journalism at Moi University in Eldoret is optimistic that his music career is of a bright future. He says that however the experiences he gets; he is destined to success. Since he is still studying, he has not given much time and entirely rooted in music due to the class works. His two songs; Nashukuru and Hakuna Kama Wewe were released when schools were closed due to the Coronavirus pandemic.

He admits that his journalistic skills have also taught him the qualities to be a good artist by knowing what his audience wants and the trends in the entertainment industry. He adds that as an artist, one needs to go by the waves and the ever-changing environment in the media. "The world is contemporary," he says, stressing that for one to fit in the current world with the generation where the internet has changed the world, one needs to be flexible. Does this mean that an artist needs to be like the swinging pendulum? Of course yes, for him or her to match his or her audience.

Narrating the other side of the music journey, Kay Blessed enunciates that although he has the full support of the parents in the journey, he has been met with 'enemies'. But which life is always a straight line? Where in this Earth can somebody progress smoothly without having black eyes? Nobody. And therefore, Kay Blessed was also there. Here in Earth where there must be the negative partner of life.

In his message to young people, the singer and student journalist reiterates that being determined and always doing what he or she likes is the sole way to success.

"Determination, meditation and practice is the best route to excellence in music," he says adding that one needs to give it a trial and throws his or her net in the water for a catch.

He draws line and challenges upcoming artists to always respect their work and put God first.

" I believe and trust in God. He is the source of my strength and everything I do, put him first, all shall be as you want," he concludes. 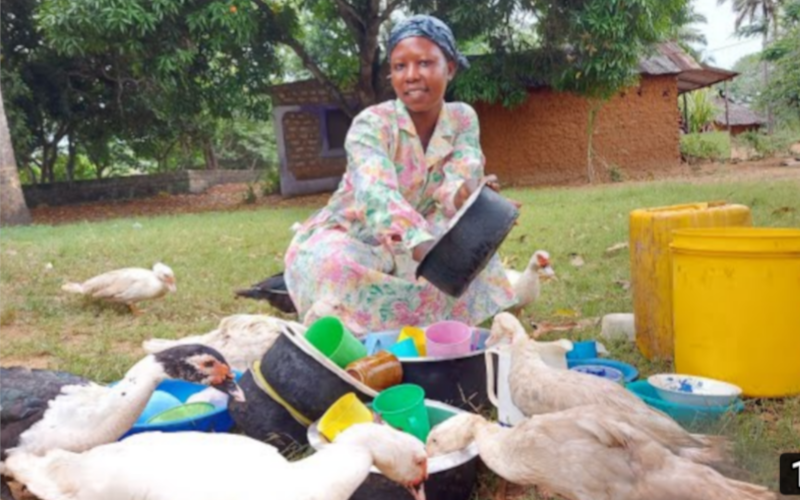